Melbourne home values increased 2.1 per cent, with houses rising 2.3 per cent and apartments 1.5 per cent in the first quarter 2020. Melbourne property investment recovery remains uneven with substantial price rises concentrated at the upper-end, led by the city, the inner east and inner south. Houses have regained almost all of the value that was lost during the slump, with just under $6,800 left to recoup. House prices are on track to set a new record high next quarter. Melbourne’s house prices are predicted to soar to a record high by next month and then reach a $1 million median as early as mid-next year, new forecasts reveal.

The news is mixed for home owners, who have seen the value of their properties rise but face the prospect of higher costs when trying to upgrade. House prices are forecast to soar by 8 per cent by the end of 2020, reaching a median of $970,000 by December. They will bounce by a further 3 to 5 per cent in 2021 to reach the golden $1 million mark by as early as mid-year. Unit prices are also predicted to rise by 5 per cent in 2020, pushing well beyond the record $549,701 set at the end of last year. Forecasts show unit prices are set to rise by a further 2 to 4 per cent in 2021. 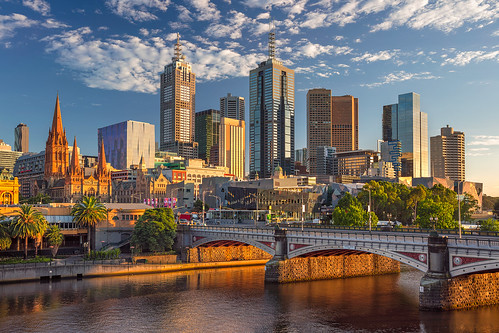 Property investors shouldn’t head too far out in Melbourne, purchasers in the north need to stay on the city side of Reservoir, while those to the west must remain east of Point Cook.

There is still good investor upside in the middle-band suburbs to the west and the north, but you’ve really got to go further out to the east [for affordability]. We’re seeing a lot of growth in some of those south-eastern suburbs now, moving down into Keysborough, Chelsea and those areas.

Melbourne’s property investment market is reasonably balanced at present with activity across most price brackets, regions and buyer types.

There are some very individual factors that have driven some suburban growth models, and that’s the ethnic enclaves – Glen Waverley, Mount Waverley, Northbourne and Doncaster East. These areas have been a significant focus for Chinese buyers and that’s an energy on its own, which tends to move outside the normal cycle.

Melbourne property investor growth moves from the CBD out, but it’s not a regular radiation. The inner city is strong, but the really strong capital growth is in more blue-chip prestigious suburbs in the next ring out in the inner suburbs. Typically that’s Hawthorn and Kew to the east, Toorak, Malvern, Armadale to the southeast, and Brighton down in the bay.

Growth is elongated towards the east and bayside. It’s not as strong in the north or west.

After this cycle, which has been very strong in the east and southeast, the next cycle may end up being one where the north gets more of a look-in, and the west.

The other tranche is more in your outer eastern suburbs and these include Ferntree Gully, Ringwood, Mooroolbark and Rowville. We suspect this is a case of that ripple effect. If you can’t afford Glen Waverley, you go to a couple more suburbs out, for example to Rowville. There’s also quite good, established infrastructure out there, although you are getting quite a way from the CBD.

Westpac upgraded its forecasts late last year and now expects Melbourne’s median dwelling prices to rise by 6 per cent in 2020. Prices would moderate due to affordability issues, Westpac economists predicted. ANZ likewise upwardly revised its predictions from a 6 per cent rise in Melbourne’s house prices to 11 per cent in the 2020 calendar year. NAB have reaffirmed their latest prediction for Melbourne of a rise of 7.4 per cent for house prices, and the same for unit prices over 2020.

Contact us for a free information pack eBook on the Melbourne property market, or to arrange an obligation free consultation.